Welcome to a very special Spring Music Preview that showcases many new artists & songs that are at radio during this very special and musical time of year. We have been inundated with new artists and music and it’s so exciting to see all of the magic coming back to radio this year. In this issue we will be highlighting many of the movers and shakers that are really making things happen already in 2019. You can see it in the charts and by the songs building at each and every format. This is an indicator that things are about to get pretty exciting with a lead into the Summer music and the touring season.
We are also putting the spotlight on the Winners for our 2019 New Music Awards. For months now our music subscribers, industry professionals and the general public have had a hand in helping us choose both our nominees and winners for our annual event. A record numbers of votes were cast in multiple categories and it really opened the entire process up to new and exciting artists and bands from both the major label and independent arena. NMW would like to thank all of those that participated in this grand event and to especially send a big congratulations to all of our winners and nominees.
Post Malone, Camila Cabello, 5 Seconds Of Summer & the red hot Khalid are among the many major label recording artists that received New Music Awards. Many independent recording artists were also singled out from Breakthrough artists Garrett Young, Eileen Carey to crossover winners Al & Trey among others. We also have some amazing radio station winners that also include program and music directors. Industry professionals and record labels are also among the winners and even Internet Radio was singled out as well among the many making the winners list.
Spring music is exploding over at Country radio with the likes of brand-new releases from Blake Shelton and his best pal and American Idol judge Luke Bryan. Scotty McCreery and Dierks Bentley are also breaking fast along with new Country independent artists Mason Marek to Ashley Best also making the list of new Spring music releases. With a special focus on the Summer touring season, it’s easy to see that the Country format is leading the charge by getting new music released just in time to help make a difference in packing venues.
Pop music is also feeling a resurgence with new music from Lil Nas X, Panic! At The Disco to new rising star Mabel. Independent artists abound from the likes of Joy Mover, Gramma Rikki, Billy F. Otis to Doug Ferony to name just a few breaking with brand new and exciting music. All you have to do is look at our music charts to see the movement from artists both major and independent. All of them deserve your immediate attention and there is a hope that many of the newcomers will be nominees and winners for our next awards event. Through the continued support from our radio stations and programmers many of the new upstarts are getting the attention they so deserve.
Now that the NMA winners have finally been announced, it’s time to get “back to business” and focus on the artists that are now making their way up our music charts. Please take the time to find out more about many of them in this issue and to see just how they are doing. Some artists are also sending out a special “thank you” to the fans and radio who have had a hand in helping them achieve success over the past year. We applaud them for making that move and they deserve your continued support.
New Music Weekly continues to offer the very best “tools of the trade” when it comes to breaking new artist and bands whether they be major label artist or from the independent arena. Through our STS tracking systems, you have the very best tool for keeping watch on how your songs are moving at radio. NMW also delivers daily information to the entire industry on fast breaking music news. Make sure to visit us online to see what else is going on in the music world by visiting our website . Spring is in the air and new music and winners abound here and around the world. 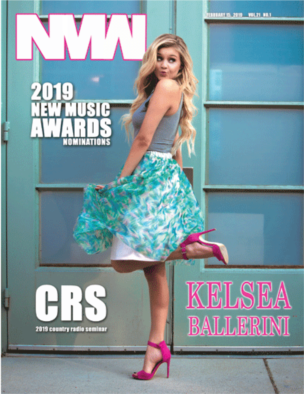 New Music Weekly has opened its ballot for this year’s New Music Award nominations. This also comes at a time when New Music Weekly is in final production for its Best Of 2018 issue.  The New Music Awards nomination process is open to their station programmers, subscribers, music fans and general public to give a helping hand in the NMA nomination process. The leading radio publication will be setting sights on potential nominees based on chart activity for 2018. Should you want to participate in the Best Of 2018 issue, or be a part of the voting process please click here.